Even if it doesn’t appear from the outside, these new speakers are very different from other existing systems.

Here the woofer is essentially coupled to a short acoustic line and doesn’t work with the box volume. This shortened line, which is not a quarter-wave line, has a slot for tuning and acoustic matching to low frequencies.

This arrangement has several advantages :

Electroacoustic modelling of the HEL concept

The HEL simplified equivalent circuit is described on the right.
The slot between line and driver define the HEL core. This core makes the difference with vented box (bass reflex).
A comparative simulation of the HEL model with the vented box was conducted using the values of a Helios with 6.5 ‘ ‘  Scanspeak driver. 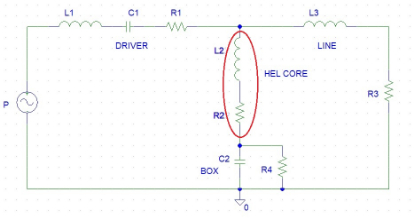